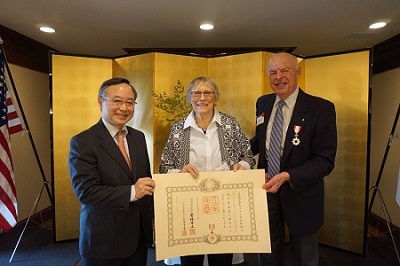 On November 14, 2019, a conferment ceremony and reception was held at the Official Residence to congratulate Mr. Burton E. Bard Jr. (former Washington State Coordinator for Sister Cities International) for his receipt of The Order of the Rising Sun, Gold and Silver Rays.

Consul General Yamada expressed his gratitude to Mr. Bard, who contributed to the promotion of friendship between Japan and the United States and mutual understanding between sister-city exchanges and congratulated the conferment of his Decoration. The Hon. Dow Constantine, King County Executive Director, thanked Mr. Bard for the social contributions through the sister city exchange programs that he has been involved with.


Ms. Pam Ikegami, daughter of Mr. James K. Fukuda whom Mr. Bard had a close friendship with for many years, said, “If my father and mother were here, they would be delighted with Mr. Bard’s achievement.” Mr. Bill Stafford, former President of The Trade Development Alliance of Greater Seattle, thanked Mr. Bard for his achievements in promoting sister city exchange and international understanding.

On behalf of the City of Seattle, Ms. Lily Wilson-Codega, Director of the Office of Intergovernmental Relations, delivered a congratulatory letter signed by Mayor Jenny Durkan to Mr. Bard in honor of his work in Seattle.