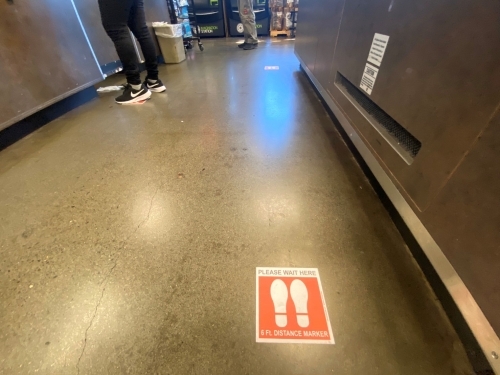 The novel coronavirus crisis is all over the world. Not just schools, but restaurants and many businesses have closed. The world as we know it has changed completely.

The first known case of the novel coronavirus was found in Wuhan, China. On January 23, the entire city of Wuhan was locked down and strict restrictions were placed on movement within China, though not much is known about how things came to that situation. On January 21, the first case in the United States was discovered here in Washington State; the person who contracted it was one who had traveled to Wuhan.

On Saturday, February 29, at the Official Residence, we were welcoming Hiroki Ohara, Headmaster of the Ohara School of Ikebana, and holding an ikebana demonstration and reception on the occasion of his visit to Seattle. During the event, a consulate staff member notified me that a Kirkland senior nursing home reported the first death resulting from the virus in the U.S., and that Governor Inslee had immediately declared a state of emergency. In February, the majority of people in the United States still seemed to be receiving the news of the virus spreading in Italy, South Korea, and Iraq as an issue that would not directly affect them. Hearing the news about Kirkland, though, I thought that it has finally come here, too. One more person died the next day, and four deaths followed the day after, and the spread of infection was reported outside the nursing home. We immediately decided to cancel the Emperor’s Birthday Reception scheduled for mid-March. Other events in Seattle were soon cancelled one after another, including popular comic festivals such as Comic Con and Sakura-Con, and the opening game of the Seattle Mariners
Unlike in the cases of terrorist attacks or natural disasters, we have no “response manual” for a pandemic. Many of our normal procedures no longer function under this situation. In such a case as this, we frequently have to rely on our own sound judgment; hence we at the Consulate are deciding what to do by receiving guidance and approaching the situation with the viewpoint of  providing accurate and helpful information to as many people as possible.

After the Governor’s state of emergency announcement, the Consulate switched to a telework-based system, significantly reducing the number of staff working at the office. We currently are not accepting visa applications unless it is an emergency. Due to our limited ability to provide our normal services, please call (206-682-9107 ext. 120) or email (info@se.mofa.go.jp) our office before planning your visit to the Consulate, as we will not be able to assist you without an appointment.

We have designated a section of our website with a red banner to make it easy for everyone to find and follow information related to the novel coronavirus. I ask those few people who still need to visit Japan under the current circumstances to check our website before making travel plans; the Japanese Prime Minister has announced a state of emergency for the entire country, and there are quarantine requirements and serious restrictions on the use of public transportation after arrival.

On March 23, Governor Inslee instituted a stay-home order called “Stay Home, Stay Healthy” and has extended it until May 4. The governor, county executives, and mayors took decisive action from an early stage based on the data analysis of the research and assiduously explained it to their citizens, asking for cooperation. A six feet “social distancing” method is well observed at the entrance and at cash registers of stores. As of April 15, in a state where population is about 7.7 million, more than 125,000 PCR tests have been performed, with close to 11,000 persons confirmed positive and nearly 600 deaths reported.


According to newspapers, experts consider early April the peak in the number of daily new infections in Washington state. It is hopeful news, but we should not let our guard down. Moreover, economic activity is paralyzed around the world, and unemployment numbers are soaring. Let’s face it: this difficult situation will continue for a while.

Apart from those performing services considered essential under this crisis, everybody is self-isolating at home, which is proving a challenge for many. In such a trying time, my colleagues at the Consulate are not just providing updates about the coronavirus on our website and Facebook page, but are also finding, creating and uploading light-hearted posts, such as about pets and food, to warm your heart a little bit. Please check out our Facebook page. Everyone, please take care of both your mental and physical health!