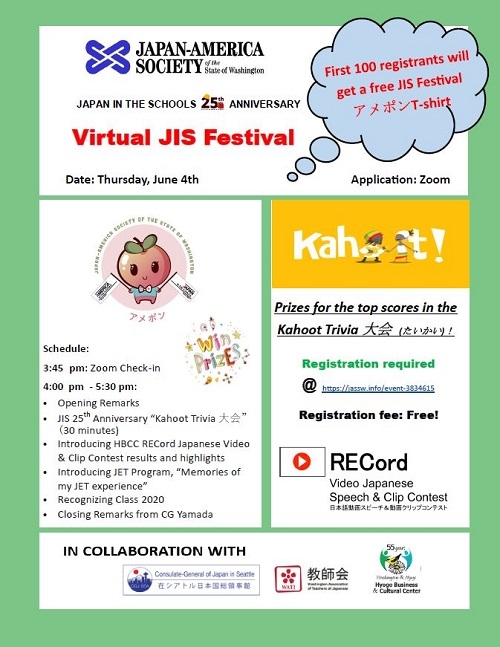 On June 4, a virtual Japan in the Schools Festival was held by the Consulate-General of Japan in Seattle, the Japan-America Society of the State of Washington, the Hyogo Business and Cultural Center, and the Washington Association of Teachers of Japanese. The event was originally scheduled to be held in person in March, however, we decided to go virtual due to COVID-19.

Ms. Kei Tsukamaki, President of the Washington Association of Teachers of Japanese also gave a speech, wishing students to have a fun time at the event. The Hyogo Business and Cultural Center then presented its PR video and talked about the attractions of Hyogo prefecture.
he 37th Washington Speech and Skit Contest also shifted to a virtual format, and because of that we changed the skit division to a clip division where students could participate individually, unlike the skits where students would participate in a group. Moreover, we asked participants to film their performance in advance rather than perform at the actual event. With the theme of "making connections through the Tokyo Olympics and Paralympics" for the speech division and "what do you know about Japan" for the clip division, participants presented a speech or a performance in their own way using Japanese they learned at school.

First-prize winner of Level 4 of the speech division，Erick Bradley (Issaquah High School)
Special Recognition Awardees of the clip division
Jayden Becles（Curtis Senior High School）and Elias Suskind（Roosevelt High School）
In Level 4, the highest level of the speech division, Erick Bradley of Issaquah High School gave an enthusiastic speech about his experience with the pole vault and won first place. In the clip division, Jayden Becles of Curtis Senior High School and Elias Suskind of Roosevelt High School won Special Recognition for their creative and original performances.
Thank you to all the 24 participants!
During the festival, we also hosted a quiz session on Japan and Japanese language for middle and high school students. Afterwards, a Consulate staff member presented on the JET program and encouraged students to apply in the future. Lastly, Consul General Yamada gave a speech thanking the sponsors, co-organizers, and volunteers who made the event possible as well as gave encouraging words to students who participated in the festival.

Thank you very much for your support, sponsors, co-organizers, and volunteers.

You can view the festival video from the below link: