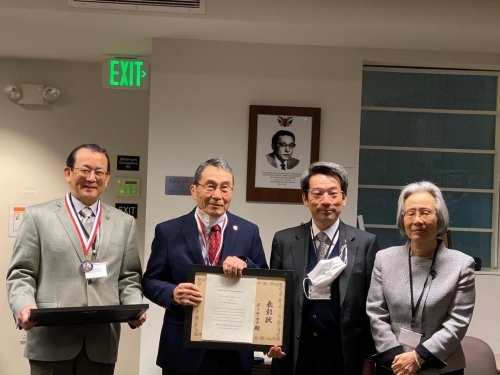 From left: Mr. Nakamoto, Mr. Kaku, CG Inagaki, Mrs. Inagaki
On January 29, 2022, during the annual JUMP event held at NVC Memorial Hall in Seattle, Consul General Hisao Inagaki presented the Consul General’s Award to Mr. Allen Nakamoto and Mr. Dale Kaku, former commanders of the Nisei Veterans Committee (NVC), in recognition of their contributions to the promotion of friendship and understanding between Japan and the United States.

Each year since 2013, Mr. Nakamoto and Mr. Kaku invited the Japan Ground Self-Defense Force and the 7th Infantry Division of the I Corps to NVC Memorial Hall for a social gathering on the occasion of their joint exercise at Yakima Training Center. By doing so, they created a new framework for exchanges between the Ground Self-Defense Force and the I Corps, which greatly contributed to the promotion of Japan-U.S. security relations.

The Japan-America Society of the State of Washington has been running this event as of 2016. It has now grown to a national and international program and is currently being held as part of the JAPAN US Military Program (JUMP).