Founded in 1987, the JET Program has sent more than 70,000 participants from around the world, including more than 35,000 Americans, to work in schools, boards of education, and government offices throughout Japan. Upon returning from Japan, participants often join alumni associations to maintain their connection to Japan. At the JET35 event, 18 of the 19 alumni chapters were in attendance as well as 2 of the 3 Country Representatives of the national volunteer-run organization JET Alumni Association of the United States of America (JETAA USA). 160 people from the US, Canada, Japan, and other participating countries attended the three-day event. 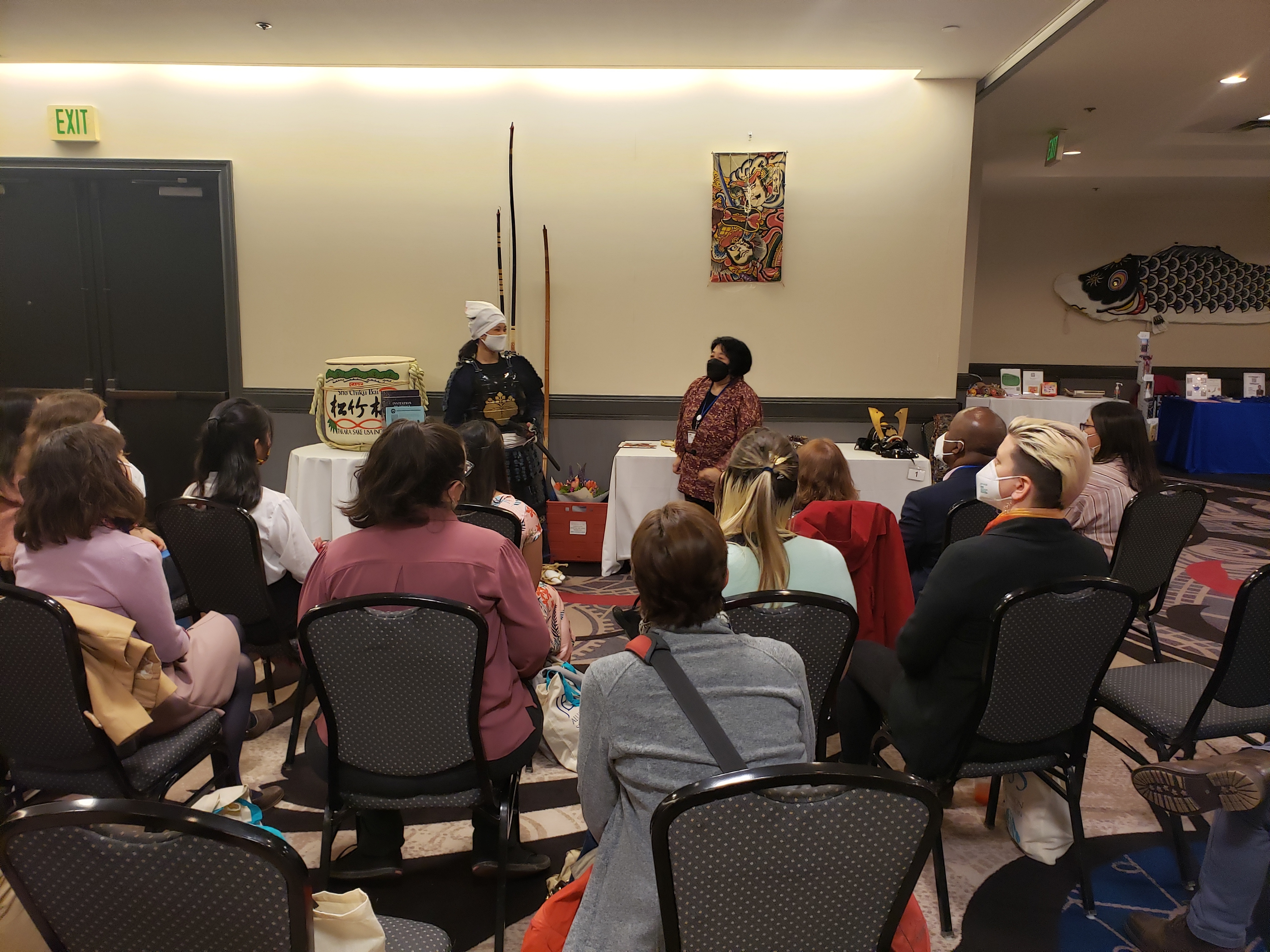 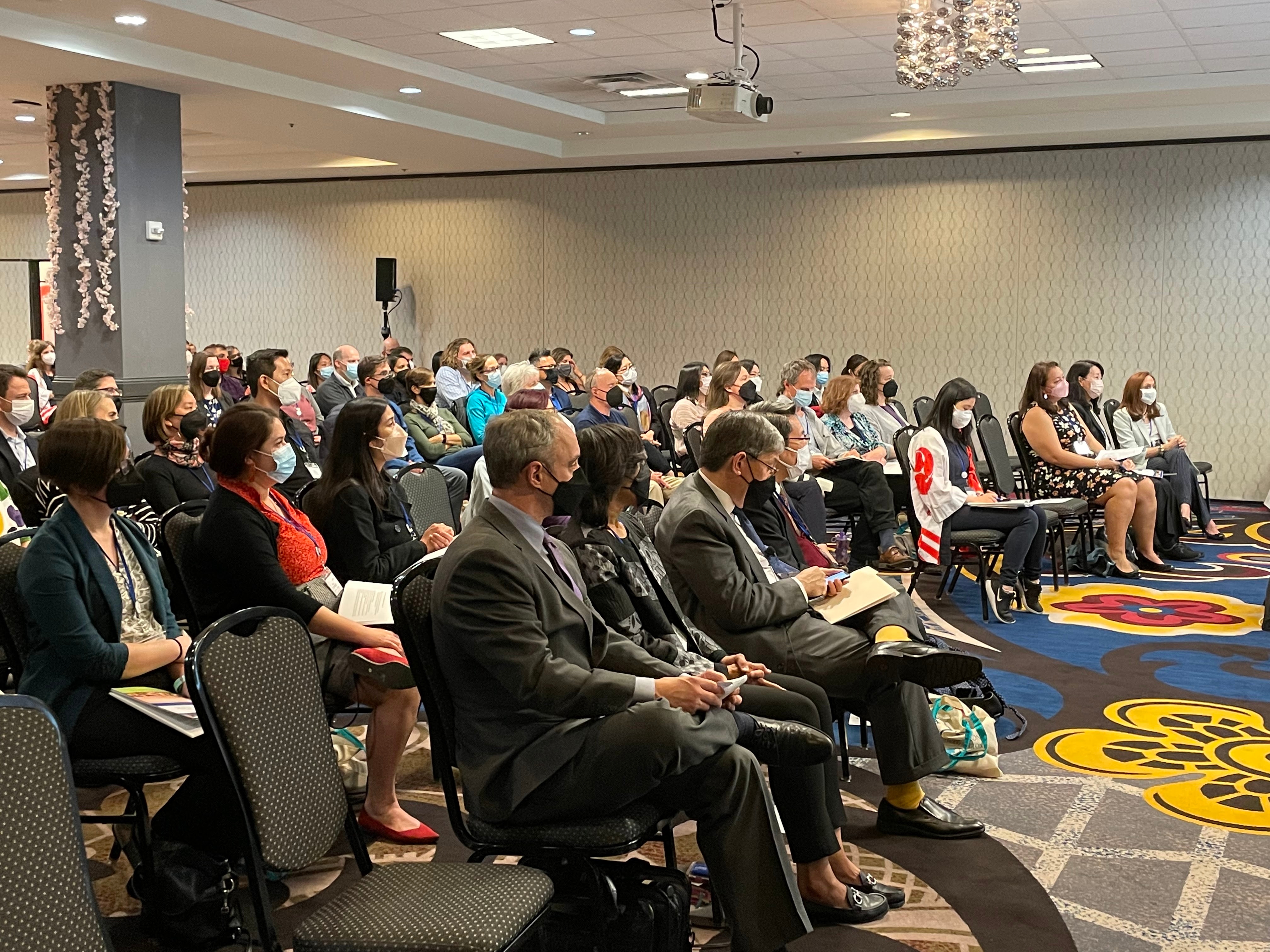 【Community members, alumni from the Monbusho English Fellows (precursor to the JET Program, 1985-86), as well as JET Program alumni returning as recently as 2021 gathered for the reunion】 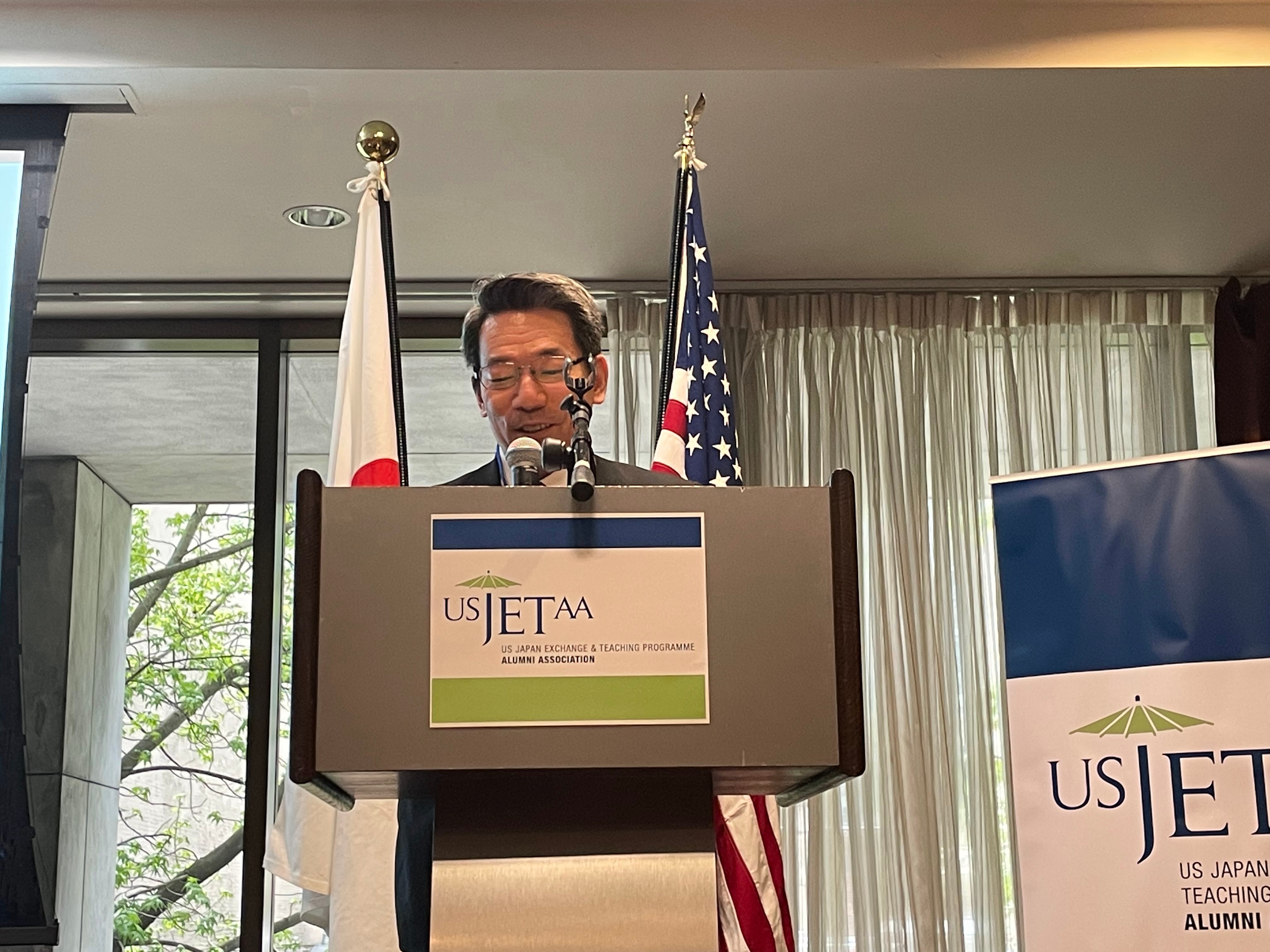 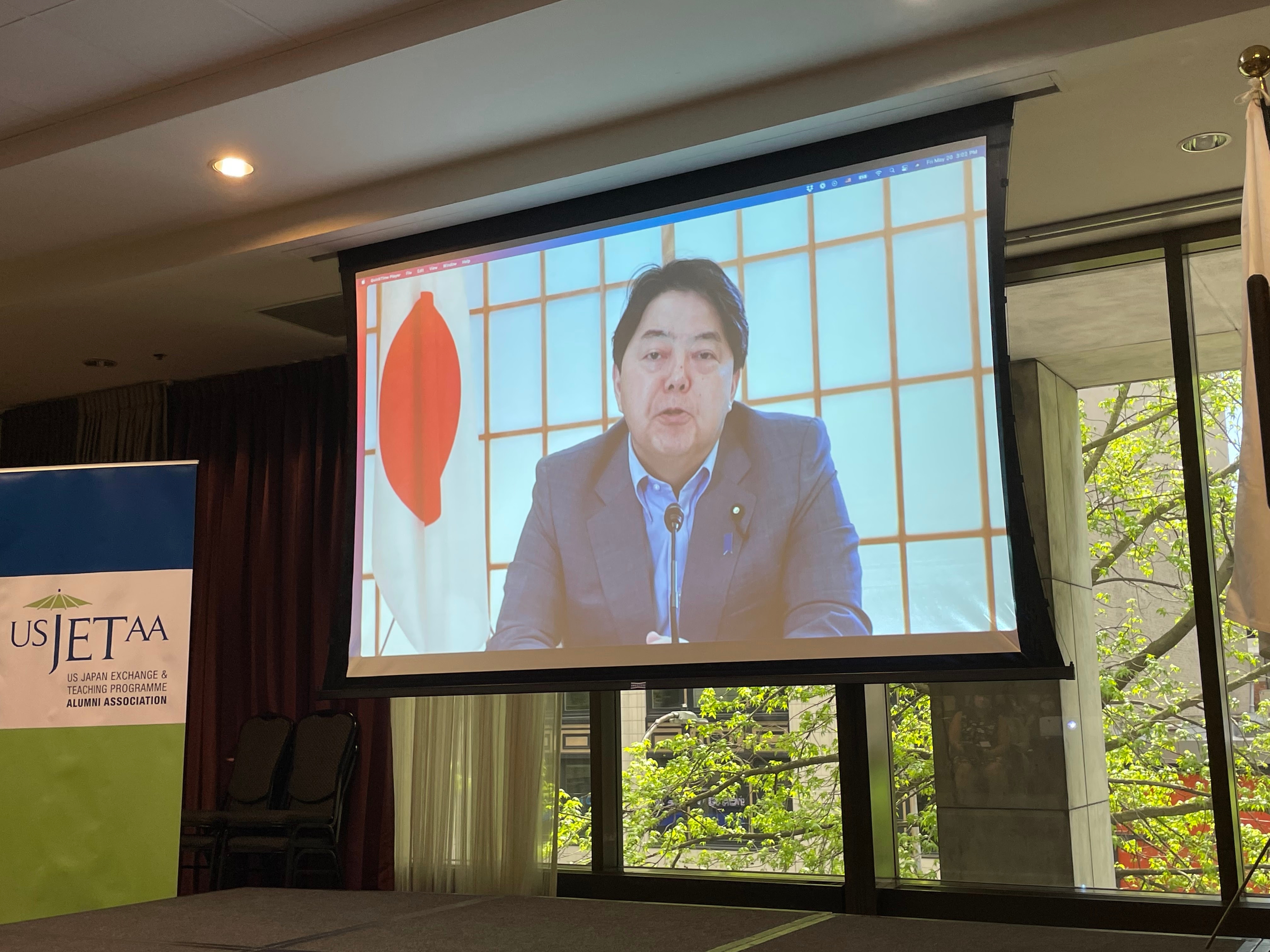 【Video message by Foreign Minister HAYASHI 】
Former JET Program participants James GANNON, USJETAA’s Interim Executive Director, and Paige COTTINGHAM-STREATER, USJETAA’s Chair, opened the event, which began with congratulatory speeches on the Program’s milestone year and spoke on the important role the Program has played in international relations for Japan.
Consul General INAGAKI Hisao touched upon how JET Program participants support Japan-US ties when they return from Japan, through engagement in sister city and state relationships and contributions through their post-JET Program careers in education, business, and community service. He also mentioned how the JET Program inspires students and communities in Japan to have an international outlook.
Ms. SHIMOTORI Mayumi, Executive Director of CLAIR New York, reflected on the beginnings of the Program, from 4 countries and 848 participants to 57 countries with over 5,700 participants each year.
Mr. HAYASHI Yoshimasa, Minister for Foreign Affairs of Japan, shared the sentiment in his video message and reflected on the support received from JET Program alumni after the Great Tohoku Earthquake of 2011.
The keynote speaker was Dr. Bill TSUTSUI, who posed the question: “Why do we love Japan?” highighting on Japan’s appeal to individuals.
The rest of the day was followed by presentations by PNWJETAA and JETAA USA showcasing various alumni associations, panels discussing Japan-US relations through the lens of sister city relationships, and a panel on how the JET Program has changed over its 35 years. That evening an opening reception was held at a local brewery where alumni openly shared their experiences  during their time on the Program. 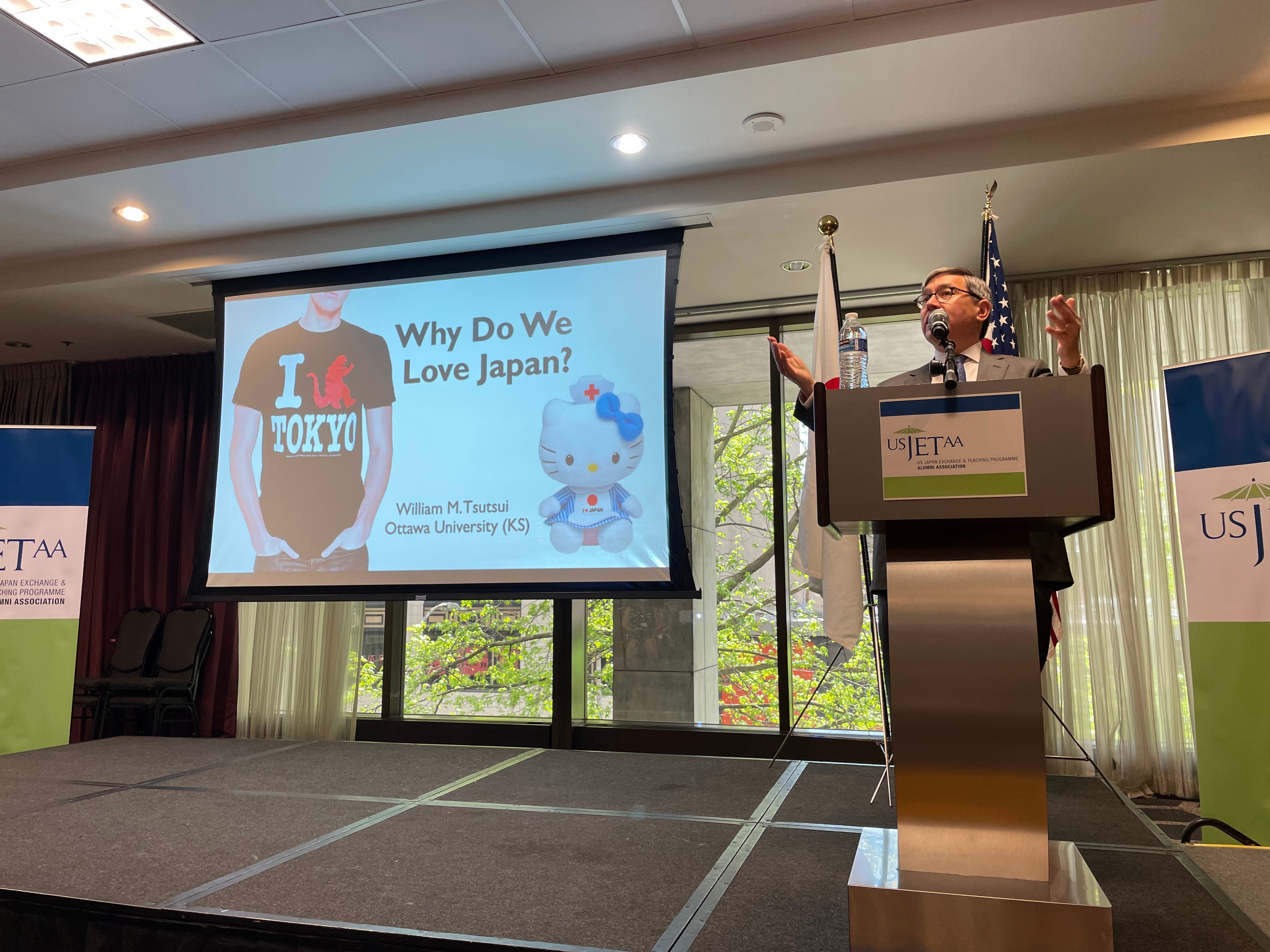 【Keynote Speaker Dr. Bill TSUTSUI: “Why do we love Japan?”】
Saturday was comprised of alumni-led panels focused on their time after the JET Program and how other alumni can learn from and share in their communities. A special moment was taken to acknowledge Ms. Bahia SIMONS-LANE, former USJETAA Executive Director, for her support of USJETAA and for making the event possible. During her tenure as the Director, Ms. SIMONS-LANE was also instrumental in working with PNWJETAA to elevate its annual Career Event from a local to a national program by partnering USJETAA with PNWJETAA and takingswitch to a virtual platform for the event.
Saturday ended with a “Haru Matsuri” that allowed participants to don their yukata, since many had not had the opportunity to wear them since returning from Japan. Sunday was full of tours and the beautiful weather created the perfect opportunity to show off the best parts of the host city to those alumni who were not familiar with Seattle. The event was a success and served to not only re-energize the participants to continue to support Japan-US relations, but also to remind everyone of the soft power and importance of grassroot exchanges like the JET Program. 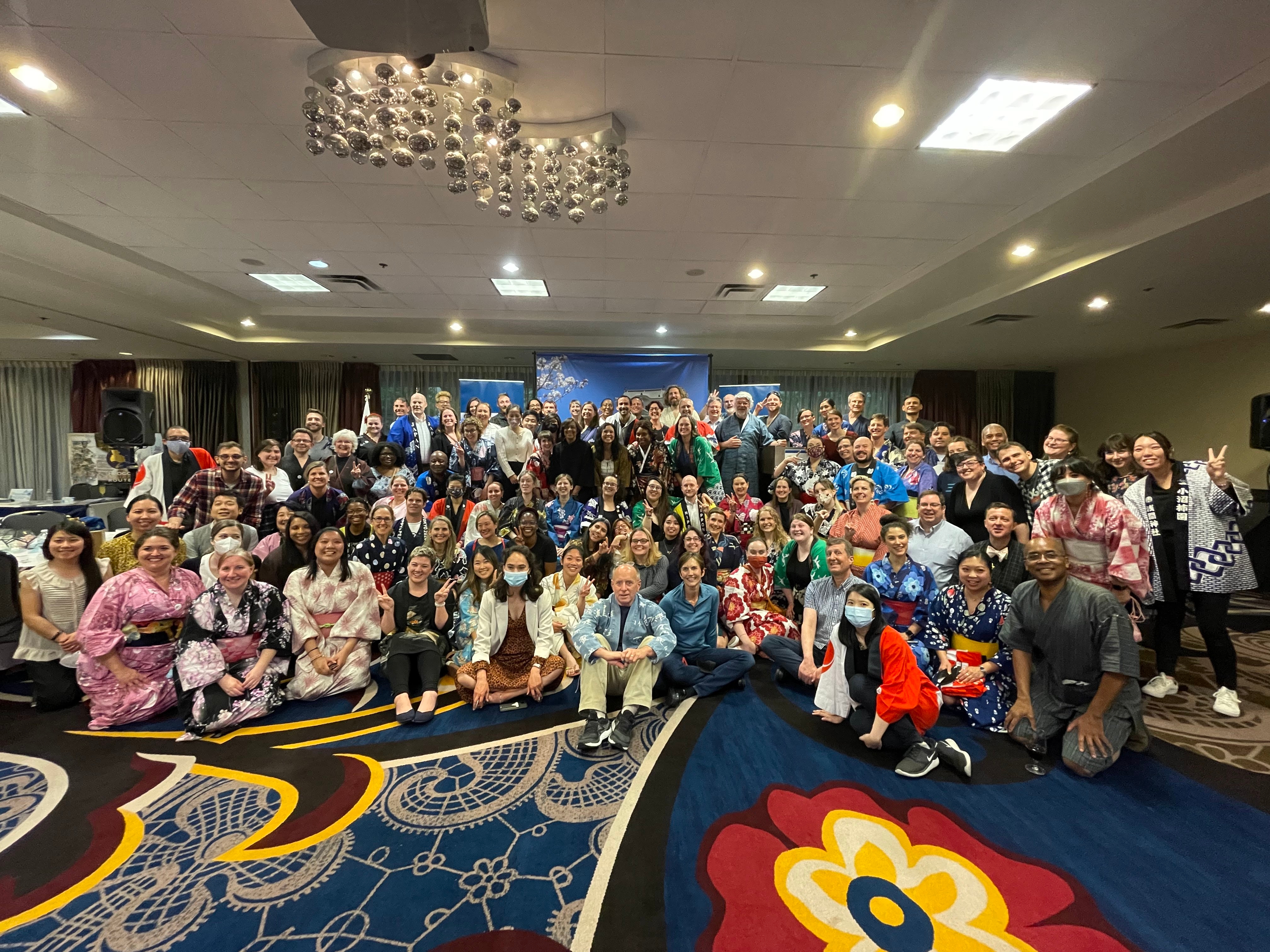