2020/3/7
On February 22, the 4th Annual Pacific Northwest Japan Bowl was held at Clark College in Vancouver, Washington. The competition was presented by the Japan-America Society of Oregon in cooperation with the Consulate-General of Japan in Seattle.

Although Japan Bowl is a quiz competition for high school students learning Japanese, competitors’ knowledge must encompass any potential topic related to Japan, including history, literature, and culture. This year, sixty participants from eight high schools in Oregon and Washington participated.
After the preliminary morning round finished, the students were able to relax and enjoy a traditional Japanese bento lunch as well as visit information booths set up by local colleges and universities and the Consulate-General of Japan. Offering a variety of information and resources for Japanese language study as well as a hands-on furoshiki tying lesson, the Consulate booth was quite popular.

As scores were being tallied to determine which teams would advance to the final round, students learned how to play a traditional Japanese card game called karuta and were entertained by a taiko performance, musical group Tako Q & Koh, and a group dance performance by the Japan Bowl volunteers.

Consul General Yamada greeted the audience and competitors to open the afternoon championship round as the finalists for each division were announced and the competition resumed.  Mayor Anne McEnerny-Ogle joined the audience in cheering on the teams that went head to head in a fierce battle of wits to determine which teams would emerge victorious in each division!

A panel of celebrity judges including Consul General Yamada, representatives from sponsoring organizations, and selected guests with native/near native Japanese language skills lent their expertise by displaying “maru” and “batsu” signs for answers to tough colloquial and onomatopoeic questions.

Congratulations to all the competitors and good luck in Washington, DC to Westview High School and Kamiak High School!  We hope that everyone will be inspired by their success at the 2020 Pacific Northwest Japan Bowl to continue studying hard in preparation for next year’s competition! 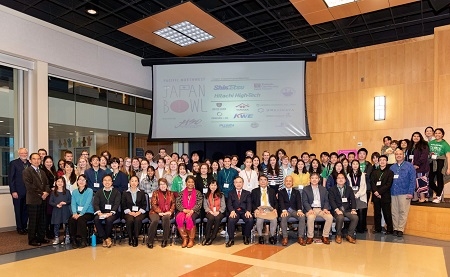